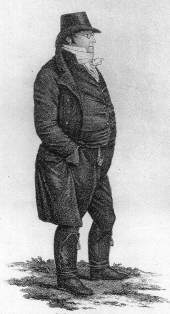 These terms, and their definitions and (where appropriate) musical examples, were printed on pages 20 to 28 of Edward Bunting's 1840 publication "The Ancient Music of Ireland". They were "...procured from the most distinguished of the harpers who met at Belfast, in the year 1792. ...The harpers whose authority was chiefly relied on were Hempson, O'Neill, Higgins, Fanning and Black..."

Denis O'Hampsey (who Bunting called Denis Hempson) was especially important as a source as he was the only one of all the harpers that Bunting met who played in the old style with long fingernails. Although all the Irish harpers still used brass wire strung Gaelic harps, by 1800 they all (except O'Hampsey) played using the tips of their fingers (as opposed to the nail technique of the medieval harpers, or the pad technique of modern harpists). Other sections of this site cover fingernail and finger tip techniques and also left and right orientation.

Bunting's published books were aimed at a middle-class readership who were expecting a romanticised version of an imagined past, and he did not hesitate to adjust his material to satisfy them. His manuscript notebooks are regarded as a much more authentic source for the material he was shown by the harpers he and his assistants met. However, the material presented on these pages seems largely not to appear in his surviving notebooks, and so the 1840 published pages are the sole source for this information. Careful analysis of letters between Bunting and Dr. James MacDonnell, as well as jottings in Bunting's manuscripts, can help us tease out which of these terms are more authentic and which may have been created from dictionaries or adjusted to fit into romantic ideas of how the old Irish music worked. Visit Alasdair Codona's email discussion group for some interesting analysis and speculation.

How to use this guide

Each of the terms is listed under the name Bunting gave it, and each has a separate page. Click on the term you are interested in, and you will find a facsimile of Bunting's text, discussion of the term and its meaning, pronounciation and an illustration or video demonstration (items with video are marked v). You can use the prev and next buttons to move up or down the list. Where appropriate the entries are cross-referenced; use back to retrace your steps. Alternatively, close the window to return here, and select another term.

Gráinne Yeats spoke the terms in Irish
Tony Dilworth spoke the terms in Scottish Gaelic
Colm Ó Baoill wrote the discussions of the Gaelic words.
Simon Chadwick made the video clips in 2008, replacing the original very small ones made in 2002 by Bill Taylor and Barnaby Brown. Bill's video clips have been archived here.
Simon Chadwick designed the project and built the actual web pages.

You are more than welcome to make use of this glossary at your website. Please click here to find out more.